Get the Ebook and Workshop The Bridge of Consciousness

HomeGet the Ebook and Workshop The Bridge of Consciousness

THE BRIDGE TO CONSCIOUSNESS 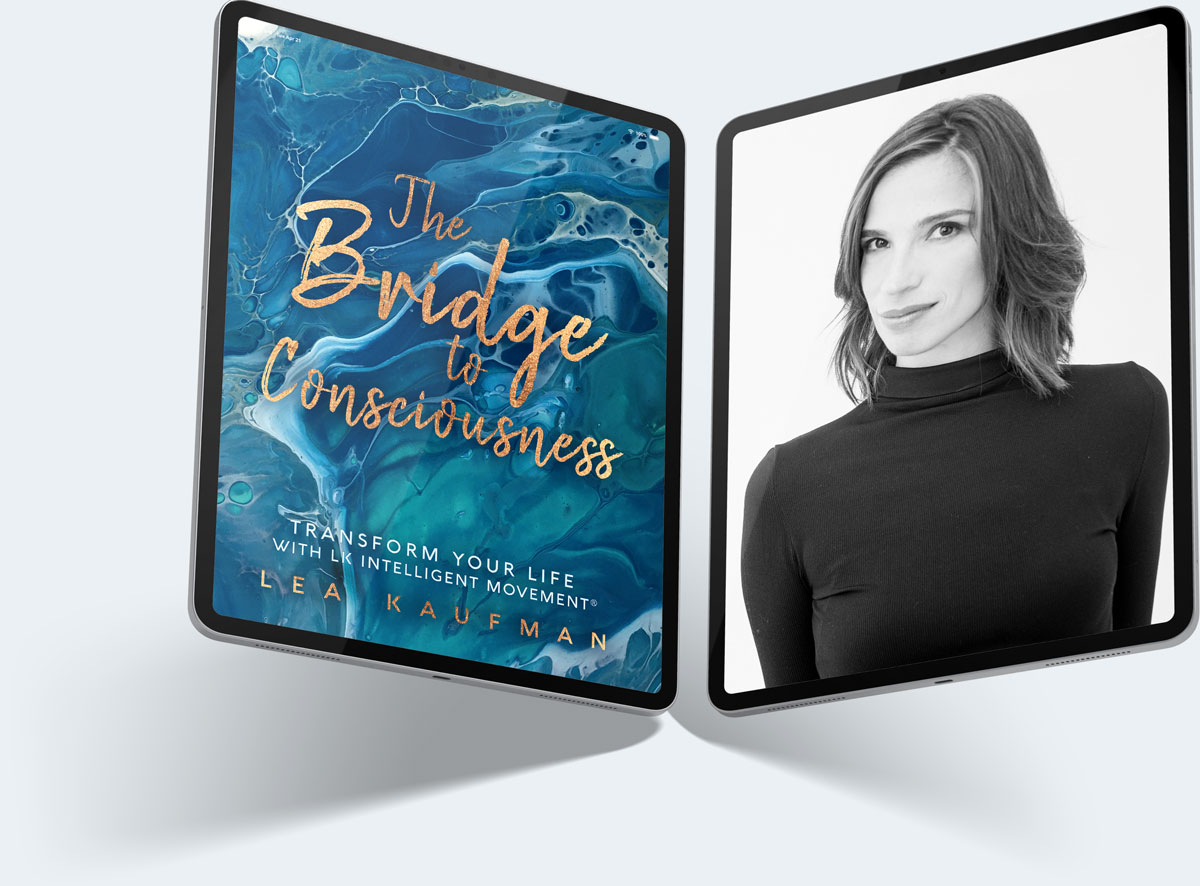 Through this book you will learn how to use the body as a bridge to consciousness in a four-phase process that shows you how to live every day with a conscious connection to yourself, to people, and to the world around you.

In the workshop, you will learn how to apply all the concepts in the book to improve your posture, focus your mind, harmonize your emotions and connect with consciousness.

LK INTELLIGENT MOVEMENT IS PRACTICED EVERY WEEK BY 600.000 PEOPLE AROUND THE WORLD. THIS TECHNIQUE PROPOSES RECOVERING THE POWER THAT COMES WITH THE ABILITY TO FEEL. Lea Kaufman is the creator of the LK Method and the LK Intelligent Movement technique.
She is a Medicine Woman according to the Mayan tradition, author, engineer, actress, dancer, somatic educator and entrepreneur.
From her online platforms she impacts the lives of more than 600,000 people every week. There are certified Teachers on her technique LK Intelligent Movement expanding consciousness in more than 25 countries and 3 continents. She is the author of two books, a third on the way and producer of the web series Transformed Realities.
In August 2022 Lea launched her 2nd book “The Bridge to Consciousness”, which in just 3 days on the market, became a Best Seller in its category on the Amazon.com platform.
Apodérate de tu cuerpo, (Empower your body), her first book, was published by Spanish publisher Sirio in January 2015, and in June of that same year, a second edition was released. During that year’s Bogotá Book Fair, Lea was listed among “The 10 most anticipated authors”, and Apodérate de tu cuerpo, (Empower your body), made the list of the fair’s best sellers. She was one of the pioneers of online entrepreneurship in 2011, and since then she has continued to grow as an entrepreneur and leader, her latest achievement is being the only Latina to be invited to Necker Island in September 2022 to meet Sir Richard Branson as part of “The Collective: The Top Online Business Women” meeting. Having started her business as a young migrant woman with no money, it is a great honor to be part of these circles.
But what she is most passionate about is the understanding of human being, its capabilities and tools. This passion led her to study with the brightest teachers both within the scientific and spiritual realms, which gave her a deep knowledge she shares with you today. She has been fiercely dedicated to her own growth and helping others for the past 20 years. She is famous for her close, solid and profound style, to pull back the veil and enter into the ultimate reality. Her presence transforms and allows you to go deeper into yourself, accessing your own wisdom.

Her podcast “El Puente a la Consciencia” (The Bridge to Consciousness) is one of the most popular in several Latin American countries.
From Uruguay to Spain, Guatemala to Bali, Colombia to Vietnam, Mexico to Turkey, USA to Singapore she has been collecting knowledge, experiences and tools to navigate these times and to be able to create a different future. Her work is based on somatics, shamanism, sacred dances, the fourth path, the Mayan spiritual path, cultural biology, systems theory, art, polyvagal theory and many other disciplines that converge in the LK Method.
Lea has been featured in the most important media in Latin America.

We use cookies on our website to give you the most relevant experience by remembering your preferences and repeat visits. By clicking “Accept All”, you consent to the use of ALL the cookies. However, you may visit "Cookie Settings" to provide a controlled consent.
Cookie SettingsAccept All
Manage consent

This website uses cookies to improve your experience while you navigate through the website. Out of these, the cookies that are categorized as necessary are stored on your browser as they are essential for the working of basic functionalities of the website. We also use third-party cookies that help us analyze and understand how you use this website. These cookies will be stored in your browser only with your consent. You also have the option to opt-out of these cookies. But opting out of some of these cookies may affect your browsing experience.
Necessary Always Enabled
Necessary cookies are absolutely essential for the website to function properly. This category only includes cookies that ensures basic functionalities and security features of the website. These cookies do not store any personal information.
Non-necessary
Any cookies that may not be particularly necessary for the website to function and is used specifically to collect user personal data via analytics, ads, other embedded contents are termed as non-necessary cookies. It is mandatory to procure user consent prior to running these cookies on your website.
SAVE & ACCEPT